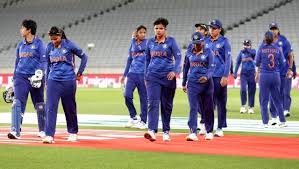 With a victory over the hosts in the second women’s ODI on Wednesday, the self-assured Indian team will bet on themselves to secure its first series win in England since 1999.

The Harmanpreet Kaur-led Indian team improved in all areas of the game after suffering a dismal 1-2 loss in the T20I series. Three days later, they defeated England by seven wickets in the series opener at Hove.

India looked like a much better squad in the first game and would be seeking to capitalize on the momentum even if England is without several of its key players.

Anjum Chopra scored a century and a half, and the Indian team went on to win the ODI series 2-1 in 1999.

In addition, it serves as Jhulan Goswami’s farewell series because India won’t have another 50-over assignment until June 2023.

The 39-year-old world record holder for most wickets, who was playing in her first game since March, displayed a little trace of rust and was the most frugal of the bunch, returning with stats of 10-2-20-1.

Smriti Mandhana, the vice-captain of India, opened the batting display with a magnificent 99-ball 91. Wicketkeeper batswoman Yastika Bhatia also hit a fifty before captain Harmanpreet completed the methodical chase with an unbeaten 74.

The middle order will be expected to step up, and the skipper will be hoping opener Shafali Verma does well because she hasn’t reached the fifty-run mark in more than ten innings.

On the other hand, England will rely largely on the effective Sophia Dunkley, who had an excellent T20I series and will hope that their batters put up a high total.

Prior to a one-handed catch by Harmanpreet that ended the duo’s partnership and set off a collapse, Dunkley and Alice Capsey once more appeared dangerous in the middle.

A side seeking to establish its footing in 50-over cricket will receive a huge confidence boost if India manages to win the second game.

India’s skipper Harmanpreet Kaur led his team to a commanding 88-run victory in the second One-Day International, giving India their first series victory over England since 1999.

England needed to get off to a fast start in order to chase down the large score, but Renuka prevented them by removing two top-order batters in Emma Lamb (15) and Sophia Dunkley (1).

By the end of the eighth over, the visitors were down to 47 for 3 as Tammy Beaumont (#6) was run out.

Before England’s chase collapsed with Wyatt being removed by Renuka in the 30th over, Wyatt and captain Amy Jones (39) shared another 65 runs with Alice Capsey (39), who had put together a 55-run partnership for the fourth wicket.

Charlie Dean (37), Kate Cross (14), and other players gave it their all in the closing moments, but India’s outstanding victory proved to be too much to ask.

When given a chance to bat, Harmanpreet hammered 18 fours and four sixes on her way to 111-ball innings. She also shared a brilliant 112-run partnership with Harleen Deol for the fourth wicket (58 off 72 balls).

For the unbroken sixth wicket partnerhip, she also scored 50 runs with Pooja Vastrakar (18) and another 71 runs in four overs with Deepti Sharma (15 not out).

While the 334-run mark in a WODI always seemed unrealistic despite the pitch being a batting belter, Harmanpreet effectively stole the game away from England in the final three overs.

The Indian side scored 62 runs in the final three overs thanks to its captain, who was in imperious form as she reached her seventh WODI hundred.

The innings featured many of Harmanpreet’s signature slog sweeps over cow corners, which earned him a few sixes, as well as scornful sixes over the cover area.

Because the surface provided minimal assistance for bowlers, it was fairly simple to hit through the line, which hurt England’s bowling assault. Only the off-spinner Charlie Dean (1/39) finished with decent stats.

Freya Kemp, a left-arm seamer making her debut, was the worst victim. Up until the conclusion of her seventh over, when she had given up only 28 runs, she was performing admirably.

Harmanpreet was so dominant during their sixth-wicket stand that Deepti Sharma, who still holds the individual record (188) for an Indian hitter in WODIs, was more of a spectator.

In the most recent rating update, a number of people moved up, including Kaur, Sharma, Lamb, and Dunkley.

Following her achievements in England, India opener Smriti Mandhana has improved significantly in the most recent ICC Women’s Player Rankings update, moving up in both the ODI and T20I lists.

After scoring a match-winning 91 in the opening ODI of their series against England, the left-hander has climbed three spots to seventh place, while her total of 111 runs in a prior three-T20I series has propelled her two spots to a career-best second place in the shortest format.

Read Also : What are the golden rules of investing in the world of the stock market?

The ones listed above are some of the top-notch pieces of Indian women’s cricket match today highlights in this year’s IPL tournament. They must have alerted you about the happenings taking place around the most loved sport, cricket.

Tired of minimal savings? Here’s how you can start building wealth today!

Know Shunt - March 28, 2022 0
Every financial plan's goal is to generate wealth. Wealth creation is something that humans strive for from a young age. Most people are confident...

Benefits of Air Conditioning When You Have Kids

Know Shunt - February 14, 2022 0
All parents know that taking care of children is a job in itself, one that necessitates the full attention of parents. Even if your...

Know Shunt - November 10, 2022 0
A beautiful and functional bathroom is something that most people would love to have. For this reason, some homeowners may prefer to stock up...

Know Shunt - January 30, 2022 0
Parents and students can login to the Skyward Fbisd website to access grades, attendance, and other information. They can also check the schedule and...

How to Choose Cash-Home Buyers: Everything You Need to Know

Know Shunt - December 9, 2021 0
Buying a home can be overwhelming. There are many factors to consider, and you want to make sure that you get the best deal...