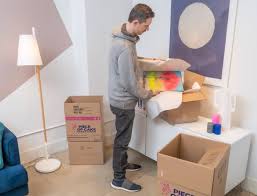 It actually has much more to take note of than just that. There’s a strategy that is to be implemented, and to top it all off – each move requires a different strategy.

Starting Off With Unused Material

For removalists, every little move is strategic and not rash or spontaneous. They start off by packing all rooms and places of the house, leaving behind the main bedroom as the last agenda to pack on the list as it keeps a window for error or unforeseen open, for instance; if the move gets delayed and not everything can be transported on time – a bedroom will still be available for the client’s ton reside peacefully in until the move can be completed.

On most occasions, removalists start off by removing larger pieces of furniture/ belongings first and then move on to the smaller pieces that are easier to transport from one place to another. This technique also assists in organizing space within the truck.

It organizes belongings in a manner that is easy to load and unload while keeping track of knowing what piece of furniture goes where. In addition, it also is the perfect way to save and create space in the truck.

Rooms that are initially targeted to get the move up and running include the basement, the attic, and other rooms that are used majorly for storage. Guest rooms are also ideal for packing first as they consist of little to know precious and valuable belongings.

They mostly include a bed set and spare bedding. Another go-to whilst crossing off the moving list is packing clothes that are out of season; these are easy to pack up as they are hardly in use and are already put away together in boxes or other storage items.

Read Also :What Is The Satisfying One With Website Personalization?

The Art of Stacking Up Objects

Another well-implemented strategy used by removalists such as the Sydney removalists place heavier and more resilient pieces of furniture first and placing fragile objects on top of them to make sure nothing gets stomped on or broken during the move.

The spaces left unused by the removalists after stacking up objects on top of one another between the pile of objects and the roof of the truck are filled up with cotton and other soft stuffing materials to eradicate the chances of any possible movement that could fracture the tower and doom the firmly placed and packed items to a fall.

An important note to take while packing by movers is to take into consideration that since the client is ready and all set to go, they will not be hosting any guests or parties, so it’s safe to start by packing their fine china and other fancy kitchen objects.

However, while part taking in this procedure, it is of utmost importance to follow safety measures that ensure the well-being of such valuable pieces by wrapping them properly in bubble wrap and other protective gear.

The sequence of how each item is packed and prepared is tricky but not as much as it might look out to be. Start with things that you use rarely and work your way up.

Finish Your Decoration with Modern Abstract Paintings at Home!

Know Shunt - August 28, 2021 0
If you want to bring a new dimension into the vacant wall then abstract paintings are the best choice. Along with colorful and effective...

Know Shunt - September 17, 2021 0
Exercise is very important for every year to ensure good health. Today, if you think you are eating a portion of solid food, then...

Mubashir Khatri - December 31, 2021 0
If you love watching movies, DesireMovies is the site for you. It offers a vast collection of films and TV shows. If you want...

How Does IG Panel Work?

Mubashir Khatri - April 17, 2022 0
If you're new to the world of social media, you should consider downloading IGpanel. It's easy to use, free, and can help you gain...

Mubashir Khatri - August 13, 2022 0
If you're looking for a great way to watch movies, download free content, or stream free TV shows and movies, you've come to the...